I was visiting the Business Continuity Institute Central Office recently in Reading and stayed as usual in a budget hotel in the city centre. The hotel was busier than usual so I was forced up to the eleventh floor.

On heading out for dinner one evening I caught the lift and on the way down was joined by two young women and a middle-aged man. As we neared the ground floor the lift jumped slightly and then stopped but the doors did not open. I was the first to make the joke ‘oh wouldn't it be funny if the lift was stuck’, nervous laughs followed but on re-pushing the G button nothing happened. The alarm button swiftly followed and then we heard staff outside reassuring us that we would be rescued in a moment.

Thirty long moments followed, in which staff were heard clawing at the lift door and we the occupants began taking layers of clothing off as the temperature inside rose to an uncomfortable level.

Now readers at this stage you’re wondering where I am going with this one aren’t you.

Well, it brought to mind one of the most important aspects of running any exercise… realism. If this had been inject one in the hotel’s incident response test they would have been doing OK; but as all good facilitators know it was time to spice it up at bit, but the almost ‘Fawlty Towers’ esq storyline that followed was truly pushing it.

Firstly, the staff suggested turning off the lift spot lights to keep the temperature down, great idea but then when we were plunged into complete darkness one of the ladies told us she suffered from anxiety and it might trigger an episode.

Secondly, the other lady declared she was pregnant and needed to sit down, which we accommodated on the tiny floor area utilising our discarded outer clothing.

And finally, the man who had earlier been enjoying a liquid lunch, by the smell of his breath, needed the toilet urgently.

At this point the staff managed to force the doors open six inches, as we were trapped between floors, and provide us with an empty water bottle for the man to relieve himself in to.

After over an hour and a half we were finally released by an out sourced lift engineer, who didn't appear to appreciate being reminded of his sixty-minute callout time as it had disturbed his evening meal.

The moral of the tale is, when preparing exercise scenarios remember to write ‘reasonable worst case’ ones which challenge staff to resolve realistic but imaginative problems. 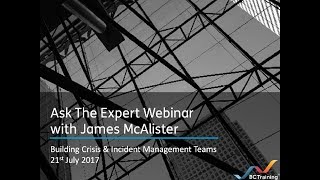